Secure your date with a refundable* booking fee.
Your order has been declined. Please double check your Credit Card Details or contact support for information.
Secure My Date We'll schedule a followup appointment to discuss details after…

All payments are through a secure network equipped with 256-bit encryption. Your credit card information is never stored in any way. We respect your privacy...

Your Perfect Wedding Music
Watch the video below to learn how booking Dream City Strings works.
Secure My Date
Hi, my name is Jared Judge, and I'm the founder and violinist in Dream City Strings, I'm so glad that you've chosen to reach out to us. And I'm super excited to meet you and your fiancé(e) and your family.
Because when we work with a couple for their wedding, you are not just another gig to us, we truly care about how your wedding goes. And we want you to have the perfect wedding.
And so if it's alright with you, I'd love to show you how you can have the perfect wedding, and how our music fits into that and helps you achieve your dream. 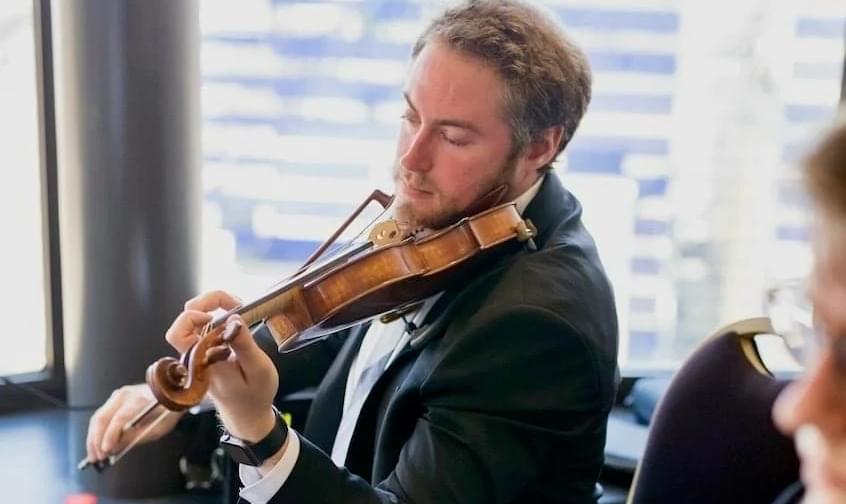 I want you to imagine your perfect wedding, specifically your ceremony.
What does it look like?
What does it sound like?
What does it feel like?
What are the emotions that you want to feel during your wedding?
And that is what this is all about.
We just recently played a wedding. And we got an email, which is pretty typical. We get these all the time. So this was from Theresa, we just played her wedding: 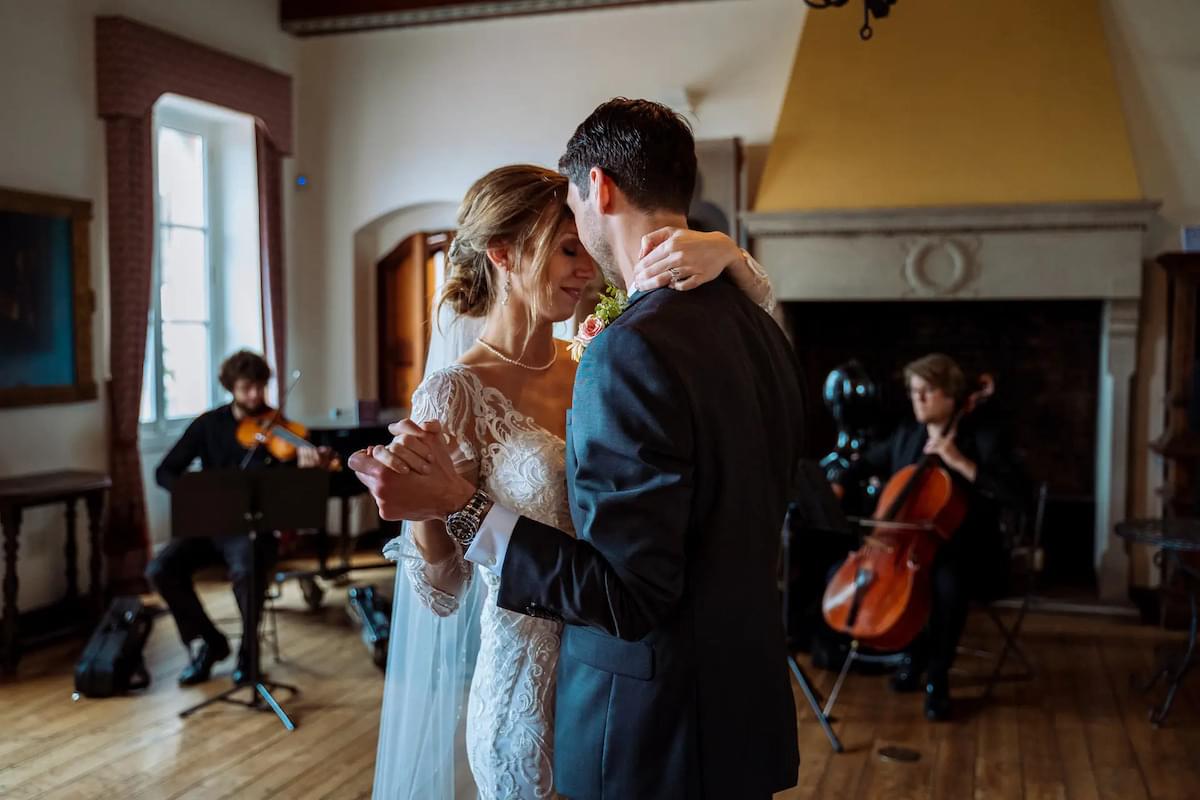 "Jared… I just wanted to quickly tell you how amazing the Quartet sounded at our wedding. You guys sounded perfect and set a beautiful tone for the wedding. I heard comments from guests too.
Thank you,
Teresa, and Lars."
And so we get that all the time because we truly care about your wedding. And we want to set the tone for your day. So what kind of tone do you want to set?

Here's why I do this and why I'm so passionate about wedding music:

I founded Dream City Music back when I was in grad school, studying to be an orchestra conductor. I've been a musician all my life. Here's a picture down here of my wife, Emily, she is a musician too. Music is in our blood.
And I personally have performed over 250 weddings. I am a board member of the Milwaukee National Association of catering and events. I have two degrees in music. And I also have been a music teacher. So I'm happy to explain music in a way that you understand and feel comfortable and confident going.
But not only that, I also teach other musicians how to perform and help couples have amazing wedding music. So I truly am an expert in this field. And I am a trainer in wedding music, and also an author of a book that also covers that topic too. 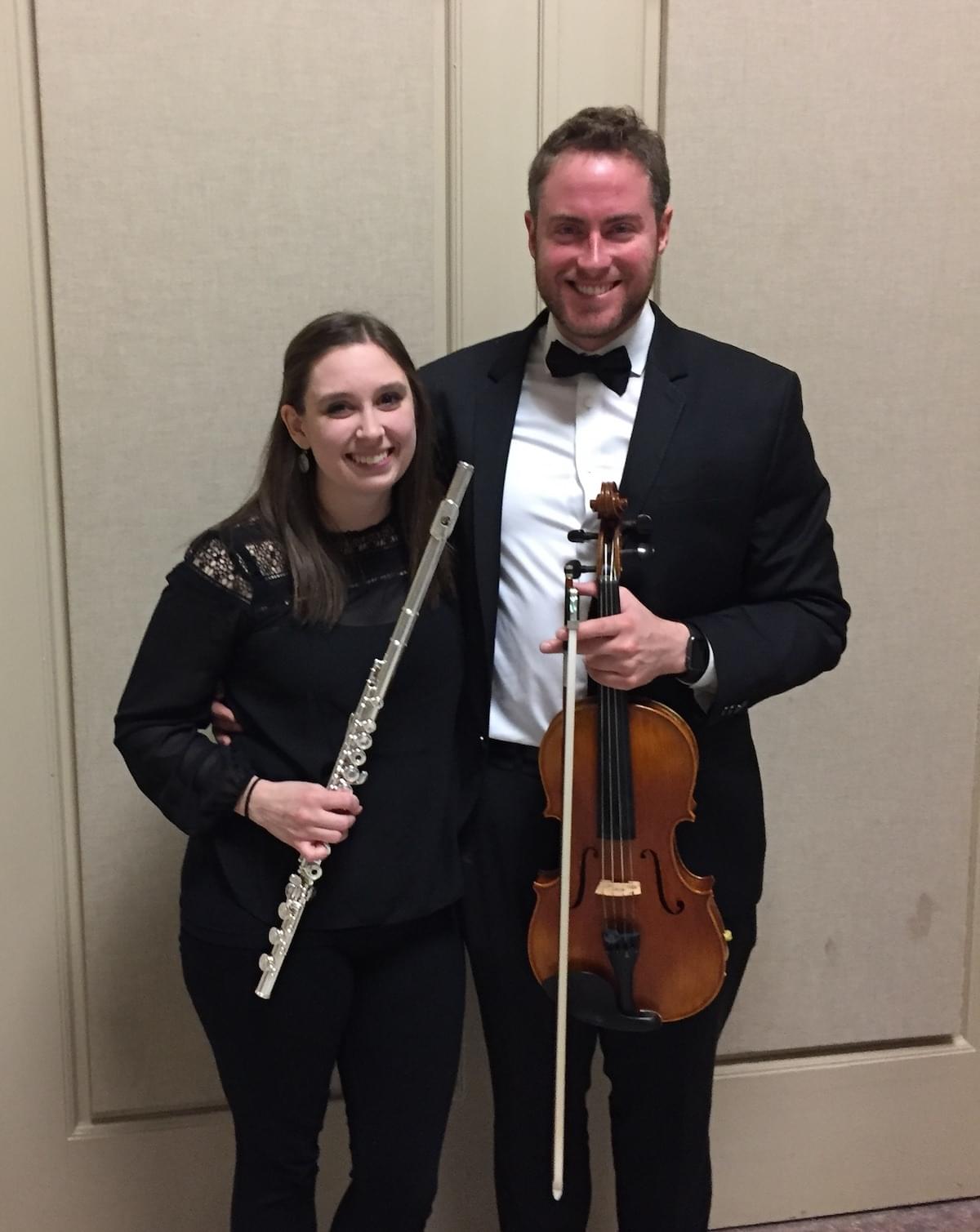 Ceremony music is all about setting the tone for the day. 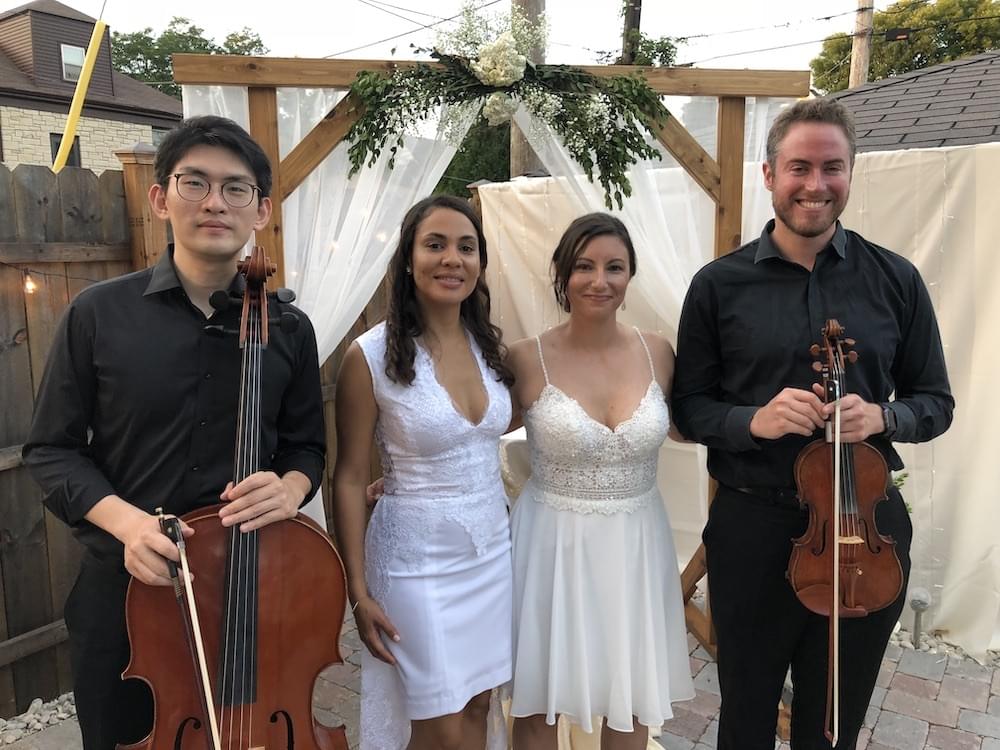 What do you want for your day?

When when I ask people that question, most of them say they want a way to set the tone for the day that feels romantic. Maybe it's elegant and intriguing. And to me ceremony is all about setting the tone for the day giving you exactly what you want.
When I ask people well, why is music even important to you in the first place?
A lot of them say that music has been an important part of their relationship. Many of them studied an instrument in school or they took music in school and they just love it so much. Or maybe they have never played an instrument their life, but they just love going to concerts. They love listening to music together. They love dancing with their partner. And a lot of the songs that we play as couples walk down the aisle is the couple's favorite song or songs they've been dreaming about it since since they were very little.
And that's what we get to do. We get to do that with live music, which is so incredible because live music helps you remember your wedding and it also helps your guests remember your wedding and treasure it forever.

Here's everything included when you book us:

Four musicians valued at $250/musician an hour.
All of our musicians have at least one degree in music. Some of them have to some of them even have three. So that's $1,000 worth of value that we're bringing to your wedding.
Song library of over 300 of your favorite songs ($12,500 value).
We're the kind of group that does things by-the-book: we do not pirate our music. We pay for the licensing (and each song costs anywhere between $25 and $50), and so that is valued at over $12,500.
Four top of the line instruments ($20,000+ value).
Each of our instruments are actually worth at least $10,000. They look amazing in photos, and the sound quality is absolutely incredible.
Music consultation with me ($250 value).
This will be one on one over Zoom or we can meet in a coffee shop. I will get you set up with the client portal, I will make some suggestions we'll go over the details in case there are any cues that we need to listen for. And that is with me bringing my years of experience with weddings, making suggestions that will help your day be as perfect as possible.
Experience of playing hundreds of weddings together (priceless).
That experience alone is priceless. That's the difference between the stakes that ruin the flow of the event and perfection that sets the tone of the event and makes it your special day as perfect as possible.
The total value that we are bringing to every single wedding and we'll bring to your wedding is over $33,750.

But you're not going to pay $33,750.
I just want to share with you, though, if you did pay that, it would be worth it. Here are some reviews from Wedding Wire:
"The string quartet was the highlight of a beautiful day five stars, everyone raved about it. And it sounded amazing."
"It was an amazing experience made the planning simple. And the performers were incredible. Our guests love it, you want somebody who is in your corner on your side, who will make your planning process and the day of as perfect as possible. That's what you're getting."
"They were wonderful, wonderful. Will recommend them any chance I get and when I had questions, Jared was helpful and perfectly lovely over the phone."
Because when you book Dream City Strings, you're not just booking the Quartet, you're also booking me.
So the total value is 33,750. But your investment today is just $1,300, we do a $200 deposit. And if you're ready to book, then go to dream city strings.com/secure. Or click the button below this video to make sure you get your date before somebody else does. But if you book within the next seven days, I'm going to give you an additional $300 Savings that's 20% off of your wedding music.

So your total investment becomes $1,000.
Secure My Date
So all you have to do is click here. You'll have a form to fill out about your name, your venue, your wedding date, and we will ask you for a $200 booking fee.

After that, we will schedule a consultation, and that $200 booking fee goes towards your wedding.
If for some reason we are unavailable for your date, we will refund that deposit immediately. No questions asked, you're not losing any money.
If we are available, then we will apply that towards your total balance. So click here to secure your date right now. And make sure you do that within the next seven days to unlock that additional savings.
Can I add on cocktail hour? Absolutely. We offer a discount for having us perform for additional time. Instead of ceremony plus cocktail hour being $2,000, it's actually only going to cost you $1,600.
And we'll take care of all that planning and final details on our consultation call and before the final balance is due. Click here to book your ceremony and cocktail hour.
Can I request songs that are not on your list? It's a good question. The answer is yes. Our song library of over 300 songs is included in your price. For custom songs, we do actually purchased the rights and licensing for and we do pass that small cost to you that ranges anywhere between $25 and $50. I will let you know for each song, you'll let me know what song you want, I will get in touch with our arranger and get the price quote, I'll send that to you. If it's approved, then we just add that onto your final balance. And it's an easy process.
Just make sure you book us first by clicking this link.
Can you accompany a singer or family musician? The answer is in order to make that happen, we do require that we plan some rehearsal time with the singer prior to the wedding. And if that's the case, there is an additional fee. And we'll let you know like book your date first, reach out to me and ask about that we can add that on. But if you feel like you don't really want to pay an extra rehearsal fee, you can have your singer perform without our accompaniment or bring in a piano player or something like that to make that happen. But we are the kind of group that makes sure everything is super polished. So we will not accompany a singer without having rehearsal built into that. If you're interested in that, just book us first by clicking this link. And we will take care of all those details afterwards.
If you have any other questions you can reach out to me you know my email address at Jared (at) dream city music.com or our phone number is 414-253-2504.
But if you're on the fence at all about booking us at all, secure your date right now because we are 90% booked for this year and next year already. And then we will answer all questions in your one on one consultation that we'll schedule right after.

So thanks so much and I look forward to helping you have your absolutely perfect wedding.
All you need is love,
Jared Judge
Founder, Dream City Music
CUSTOM JAVASCRIPT / HTML 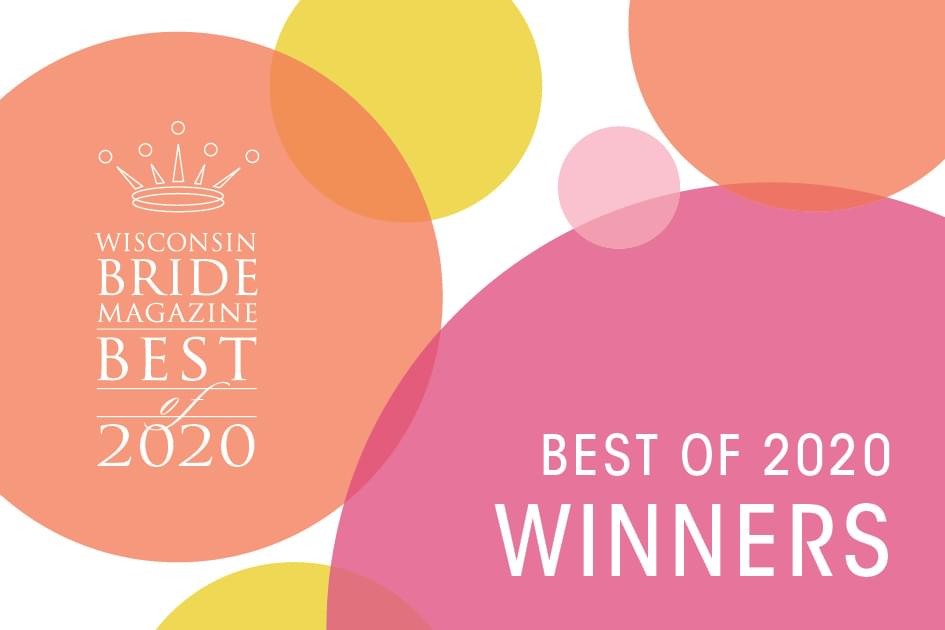 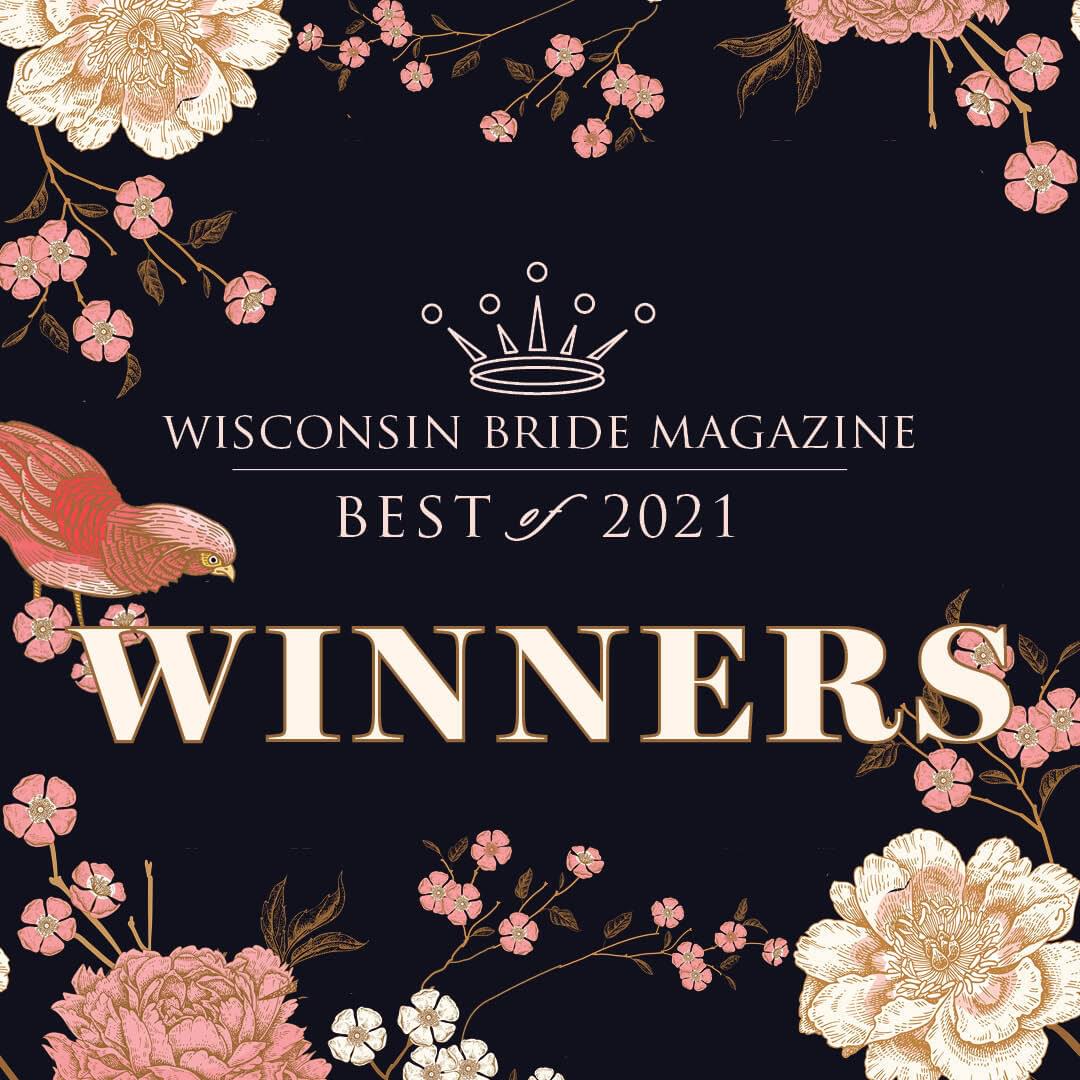 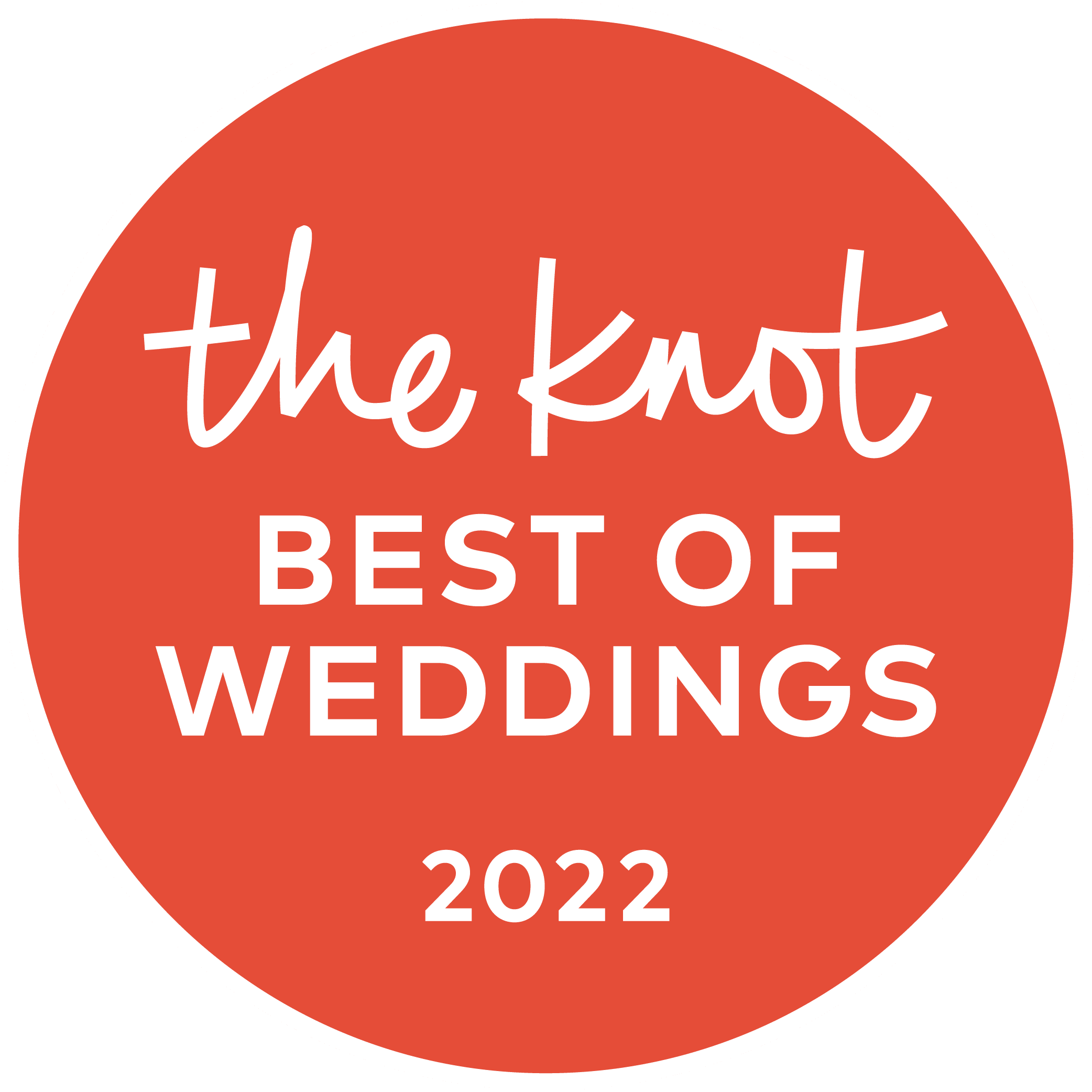 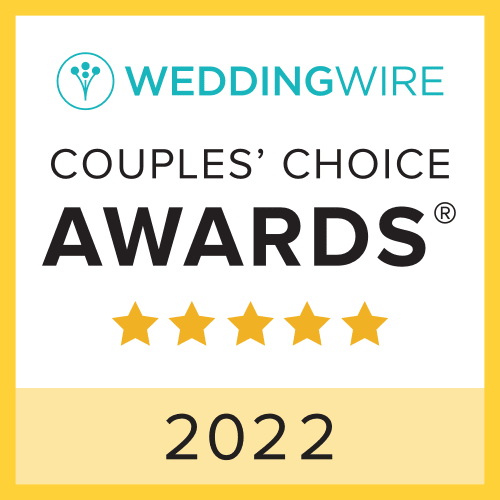 All orders are through a very secure network. Your credit card information is never stored in any way. We respect your privacy...